During our 2013 edition of the Montreal Medieval festival, we presented 2 concerts:

The Vikings... A civilization that flourished and dominated the seas during a mere three centuries. A civilization whose colourful vocabulary is the stuff of dreams: Valkyrie, Odin, runes, Yggdrasil... And yet, most of us know very little about their actual history, their daily lives, their extraordinarily extensive travels. How many of us are aware that the Vikings not only explored Iran and Newfoundland, colonized Iceland and Greenland, invaded England and Normandy, but also carried out commerce and trade in Russia and served as mercenaries in Constantinople?La Mandragore has decided to imagine the music these tireless voyagers would have notated had they had the time and leisure. A melting pot of cultures from the Orient to the West: Scandinavian folklore; songs in Icelandic, Swedish, Norwegian and Norse... and even in French; our Mediterranean instruments; and finally several instruments exclusive to Nordic lands, such as thenyckelharpa (the Swedish keyed fiddle), and the sackpipa (the Scandinavian bagpipe). A thousand leagues from our idealization of the Viking warrior, La Mandragore proposes instead a voyage through Midgard, the “middle earth” between heaven and hell... the land of humankind

THE BIRTH OF POLYPHONY

Ensemble Scholastica, under the direction of Rebecca Bain 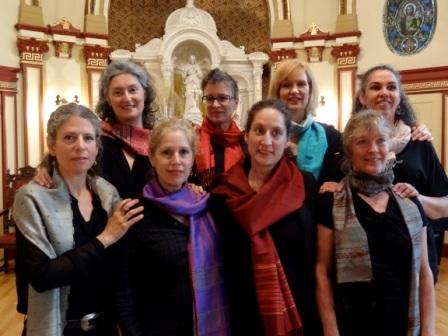 
June 23rd, after the concert by La Mandragore

The public had an opportunity to meet the musicians and organizers of the Festival. Cheese and Mead were served.